Welcome to the QuickBooks Connect Hackathon

The co-founders first stop at Connect was the QuickBooks Hackathon.

For Keith, Ryan, and 152 other developers, this year's QuickBooks Hackathon was an opportunity to build something awesome, to spend 30+ hours communing with code, to drink way too much caffeine, and come up with something great for the Intuit App Center. 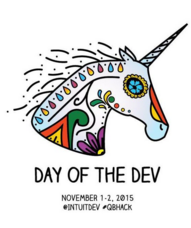 And So It Begins.

The next step? Figuring out what app to create. The first of the caffeinated beverages were consumed as notes were taken and retaken, and wireframes were sketched.

A group of accountants stopped in to answer questions and help "gut check" the things that were being built.

Hackathons aren't torture, actually, and the QuickBooks Hackathon was a blast. For the 30+ hours the team was working, few moments passed by without something awesome happening. 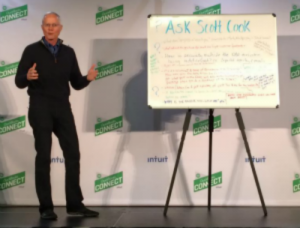 Food kept appearing as if from nowhere. Here's a small sampling of what we feasted upon: snacks of all kinds, tacos, chili, unlimited bacon, eggs, and muffins.

No hacker went thirsty as the beverage coolers were kept cold and full.

Prizes were given away. Keith was awarded a Xbox for in recognition of his contributions to open source codebase for payments.

He was hoping for the unicorn slippers, but we don't all get what we want. 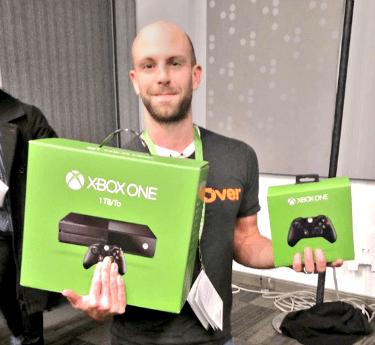 Some people caught naps with their heads down on laptops, while others claimed the tent brought in for that purpose.

More Red Bull. There were a few too many tacos somewhere in there around midnight.

The "Pitch It!" competition was coming up fast, but first, teams had to prequalify for it. That didn't make anyone nervous at all.

When ChargeOver's app, "Checkout" was announced as a semi-finalist in the Hackathon competition, Ryan and Keith were happy and exhausted.

It's unlikely that any of the hackathon teams thought they would get lucky with a judge they could fool with some front-end formatting tricks. It wasn't going to happen with this crew.

Team ChargeOver's pitch went well. They explained that many small businesses would benefit from selling on-line, but don't do so. One big thing that stands in their way is how difficult it can be to enable e-commerce on a website. The app that Keith and Ryan built makes short work of that hurdle, transforming basic websites into e-commerce sites in just minutes.

The next day, after a few hours of conference presentations and networking, Scott Cook announced the hackathon's winners.

The ChargeOver team was thrilled to be named the prize winner in "create a new app category." The competition had been tough from the beginning.

The real win? Creating something that small business owners need.

Now There's an App for That

Ryan and Keith built a nifty app called "Checkout." It's the best way for a QuickBooks small business to start selling online. A process that used to take days now takes minutes.

Here's how to work with Checkout.

With that information, Checkout automatically creates a customized sales checkout page for your product.

And that's how Checkout works! We'll be talking to more small business users and beginning a full build shortly. As you can imagine, a product created during a hackathon isn't quite ready for an app store.

Thank you to their team members and the staff from @AngelHack for making the Hackathon a great day. And night. And another day. And thanks to all of the hackers we met along the way. See you all on Apps.com!